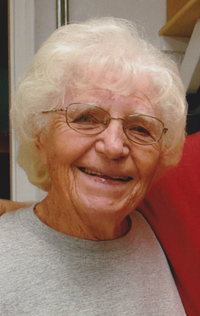 Arrangements for cremation are under the direction of the James O’Donnell Funeral Home in Hannibal. Private burial will be at Kinderhook Cemetery in Kinderhook, Il. There will be no services.

Betty was born in rural Hull to Ruth Leota Haydon Shinn and Russell Leroy Shinn, November 6, 1931, the second of their three daughters. She attended Union School on the Pike/Adams County Line.  Betty’s father died of a brain tumor when she was only 13. She helped with milking the cows and other farm chores before catching the bus to school.  She married William B. Dunker September 8, 1950. She was 18 and he was 17!  He preceded her in death December 14th, 2014.

When Hull High School burned in the 1940’s, Betty road the bus to Hannibal and graduated from Hannibal High School in 1950. She was instrumental in getting archery started in physical education program.

Betty was a hard worker, farmer and homemaker who loved Jesus and the outdoors. She taught the Hull United Methodist Nursery Sunday School class, sang in the choir and belonged to the Women’s Church Society for years. After the Flood of ‘93 she was instrumental in founding the Hull Community Church and kept books at Hull Lumber Company. Betty was well known for her animal husbandry hosting many visitors to their country home to look at her menagerie. She was well known for her hunting skills of deer and turkey and trapping. She raised a huge garden and had beautiful flowers. Besides sharing the garden bounty, she would take large bouquets to church then deliver them to shutins. She helped Bill with the farming and hog operation working right along beside him.  She had a wonderful talent for sewing, embroidery and quilting.  She gave away many handmade quilts.  Betty and Bill had Sunday lunch for their family every week until Bill’s death.

Survivors include daughters, Marla Ann Wheelan and Colae Ruth Vecchie (Ronald J.) both of Quincy. Marla spent the last  7 weeks of her mother’s life caring for her at home. Grandchildren include Gabriel Wheelan of Kinderhook, Betsy (Tom) Rush of Quincy, Alana (Justin) Gerhardt of Quincy and Alason Vecchie ( fiance Tad Peter) of Mendon.

Great Grandchildren are Tristan, Ethan and Simon Wheelan, Abigail and Isabel Rush and Hudson and Emerson Gerhardt  and Gerhardt twins on the way; sisters in law, Eileen Dunker, June (Bob) Lingwall and Pat Likes; and many nieces and nephews.

Memorial contributions may be given to Kinderhook Cemetery or Akers Chapel Cemetery in care of the James O’Donnell Funeral Home.

Online condolences may be shared and video tribute may be viewed at www.JamesODonnellFuneralHome.com.