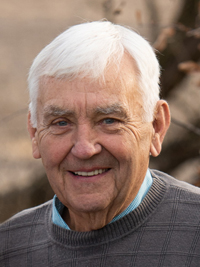 Don was educated in the Pittsfield School System, graduating from Pittsfield High School in 1958. He received his Bachelor’s degree from Missouri Valley in Marshall, MO, a Master’s degree from SIU-Edwardsville in 1970 and his Administrative Specialist degree from Western Illinois University in Macomb in 1976. He began his career in the East St. Louis School District teaching at the Junior High level from 1962-1973. He, his wife Vicki and two young sons relocated to Pleasant Hill in the summer of 1973, and thus began his twenty six year journey going from teacher to principal and then Superintendent. This was interrupted by one year as principal in the Pittsfield District at the Nebo Grade School. Education was his passion. Even though he officially retired in the spring of 1999, he never really retired as he returned twice to the Pleasant Hill Schools to help out when needed. Not only were family vacations a fun time, they were also an educational experience.

Don loved the outdoors and enjoyed camping, gardening, mowing the lawn, feeding the birds and hunting duck and pheasant. Many wonderful family trips were planned and he made sure all reservations were taken care of. He was a die-hard fan of the St. Louis Cardinals, St. Louis Blues and the Chicago Bears. But of all those activities his favorite was watching his grandchildren play sports. He rarely missed a game until his health took its toll and he was unable to attend.

He is survived by his wife Vicki, two sons and their wives, Mike and Jenny Peebles and Dan and Jenna Peebles, five grandchildren, Jalie (husband Josh), Grant, Jade, Beckett and Sadie, a brother, Terry (Norma) Peebles as well as several nieces, nephews and cousins.

Don was preceded in death by his parents, two brothers, Bruce and Stuart and a sister, Jeanne.

Don was a friend to many, a mentor to some, a gentle, kind, God fearing man that loved his family dearly. He will be missed.

Funeral services will be held Wednesday, August 18, 2021 at 11:00 a.m. at the Pleasant Hill United Methodist Church conducted by Pastors JoAnn Ruff and Martin Pike. Burial will follow at Crescent Heights Cemetery in Pleasant Hill. Visitation was held Tuesday from 4:00 p.m. until 8:00 p.m. at the Lummis Funeral Home in Pleasant Hill.

Memorials may be made to the Pleasant Hill Elementary School Playground Fund.

Lummis Funeral Home in Pleasant Hill is handling the arrangements.