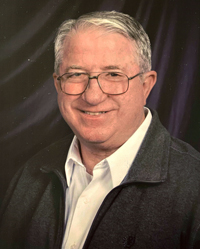 A Funeral Ceremony was held at 10:00 am Tuesday, August 17, 2021, at the O’Donnell-Cookson Life Celebration Home in Quincy. Father Scott Snider will officiate. Burial will follow at Shiloh Cemetery in Plainville, IL.

Ron was preceded in death by his parents.

Growing up, Ron grew up on a farm near El Dara, IL and attended a one-room county school called Clover School. He graduated in 1959 from Barry High School and started working in the office of Gardner Denver soon after in 1960, from which he retired in 1995. He then became a real estate agent licensed in Illinois and Missouri in 1996.

Growing up on a farm led to Ron’s love of tractors, specifically Allis-Chalmers tractors. He loved old country music, as well as visiting the Grand Ole Opry in Nashville to experience the music in person. It was there that he was able to visit with Vern Gosdin. In his spare time, Ron enjoyed watching Gunsmoke and the Andy Griffith Show on TV, reading, bowling, and eating at Coach House and Sprouts. Above all, Ron loved people. He was a great storyteller who could talk to anyone; he never met a stranger and his infectious personality will be deeply missed.

Ron was a member at Faith Christian Church.

Memorial contributions may be made to St. Jude Children’s Hospital or American Cancer Society.

Online condolences may be shared and a video tribute may be viewed at www.ODonnellCookson.com.