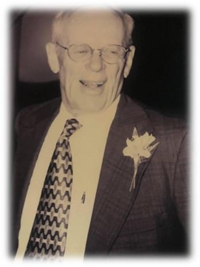 Carroll Thurston Borrowman, lifelong resident of Pike County, passed away on August 18 in his hometown of Pittsfield, Illinois, with family at his side. Carroll was born in Nebo on April 23, 1923, the first-born of Cecile and Orin Borrowman. He married Evelyn Franklin August 28, 1949 in Time, and Evelyn preceded him in death on September 2, 1986.

He graduated from Nebo High School in 1941, and farmed north of town, including setting up his own household, until 1983, when he and Evelyn moved to Pittsfield.

Carroll began raising pigs when he was ten years old, first drove the feed truck at age twelve, and farmed with his father, brothers, sons, and grandsons, always watching the weather and commodity markets, raising mostly pigs, cattle, corn, and soybeans. He was intent on making major investments of time and equipment to improve the quality of his farm land by clearing brush and trees, leveling land with bulldozers and track hoes, laying drainage tile, and much more, and continued that work into his mid-90s. He said that he spent much of his life battling cockleburs and trying to tame Bay Creek.

Carroll especially enjoyed family and school reunions, he studied family history and collected documents and photographs, including a collection of Pike County plat books tracing the Borrowman family farms since his ancestors arrived from Scotland in 1838. A voracious reader of history and fiction, Carroll was a frequent patron of the Pittsfield Library. He enjoyed traveling, especially road trips across the United States and Canada to visit relatives, and a visit to the Roberton Mains farm in Lanarkshire, Scotland, from which the Borrowmans emigrated. Each trip included stops in small town coffee shops in the interest in meeting local farmers.

A list of Carroll’s community involvement includes Election Day volunteer (1954 to the late 1990s), Farm Bureau Board member (1951 to the mid 1980s), Bay Creek Watershed Commissioner (1971-2008), Spring Creek Township Supervisor (1980-1984), Nebo Cemetery Board member, and PTA member for many years. Carroll and Evelyn were recognized for their involvement with the schools with the Barkley Award in 1968, and he was a member of the Nebo Church of Christ. He took great pleasure in being a part of the community and his relationships with friends, neighbors, and local businesses.

Funeral services were held on Tuesday, August 24, 2021 at 10:00 AM at the Nebo Church of Christ. Interment followed at Nebo Cemetery. Visitation with the family were held Monday, August 23, from 4:00 PM to 7:00 PM at Niebur Funeral Home in Pittsfield.