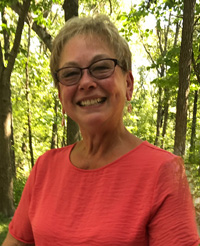 She was born at St. Joseph’s Hospital in Alton, Illinois on September 12, 1952, one of three daughters born to John W. and Viola “Vi” (Bochantin) Pero.

She grew up in Jerseyville, along with her two sisters, part of a loving and faith filled family, and graduated in 1970 from Jersey Community High School in Jerseyville. She later obtained her Associates Degree in Dental Assisting from Lakeland College in Mattoon, and her BS from Southern Illinois University-Carbondale.

For over 35 years, she was employed as a Dental Assisting Coordinator at Lewis & Clark Community College in Godfrey, retiring in 2009.

She will be best remembered for her love of family and friends, possessing a contagious smile, as well as being just as beautiful on the inside as she was outwardly.

She married Thomas D. Fox on October 16, 1976 at St. Francis Xavier Catholic Church in Jerseyville, and together they have been blessed with nearly 45 years of marriage, one son and the blessings of their three grandchildren.

In addition to her parents, she was preceded in death by her father in-law and mother in-law, Dale and Betty Fox.

Visitation will be from 4 to 7 p.m. Thursday, August 26, 2021 at Crawford Funeral Home in Jerseyville, where a Prayer Service will be said at 7 p.m.

She will be laid to rest in the St. Francis Xavier Catholic Cemetery in Jerseyville.

Memorials may be given to St. Francis/Holy Ghost Catholic School in Jerseyville.