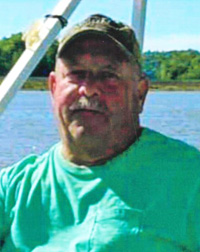 He was born on October 16, 1956 in Wood River and was the son of Woodrow W. and Sarah M. (Renfrow) Jones. Steve grew up in the Wood River area, and graduated with the class of 1974 from Alton High School.  He married the former Janet White on October 15, 1977 in Godfrey and together they have shared in the joys of raising their daughter, Amanda, and many wonderful memories as a family throughout their 43 years of marriage.  Steve truly lived a life of service unto others. He was a devoted husband, loving father and proud and doting Papa. Professionally, he saved countless lives (both on and off duty) as a Paramedic for over 43 years, retiring in 2019 from OSF Saint Anthony’s Health Center in Alton. His family takes great pride in knowing that even as Steve’s life here on this Earth ended, he carried on that same will to help others by being an Organ Donor.  Anyone who knew Steve knew of his love of the river. He took every opportunity he had to spend at his cabin on the Illinois River or on his pontoon boat, and enjoyed sharing these opportunities with others.  Above all else, he enjoyed spending time with his family. His grandchildren truly were his pride and joy and he considered being “Papa” his greatest title in this world; with his dog, Bentley, following a close second.

Surviving are his wife, Janet Jones of Fieldon; a daughter and son in-law, Amanda and Tony Witt of Jerseyville; two grandchildren, Hank and Gracen Witt; a brother in-law, Tom White of Alton; a sister in-law, Catherine White of Georgia; along with hundreds of friends, who Steve was proud to call his chosen family.  He was preceded in death by his father, Woodrow Jones; his mother, Sarah Vaughn; as well as his father in-law and mother in-law, Harold and Virginia White.

Visitation was held from 3 p.m. until time of prayer service at 7 p.m., Wednesday, September 15, 2021 at Crawford Funeral Home in Jerseyville.   A Mass of Christian Burial will take place at 11 a.m. on Thursday, September 16, 2021 at St. Mary’s Catholic Church in Fieldon, with Father Hyland Smith and Father Martin Smith officiating.  Graveside services will follow at St. Mary’s Catholic Cemetery in Fieldon.

In lieu of flowers or plants, memorials are encouraged to Saint Francis/Holy Ghost Catholic School or to Friends of Kids with Cancer.  Memories may be shared with the family by visiting www.crawfordfunerals.com