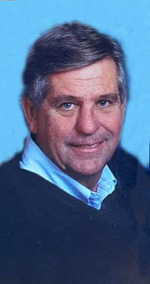 His life story began in Jerseyville, Illinois on May 3, 1944, being the fourth of six children born to Harold C. and Lou Ellen (Mashburn) Landon.

He was blessed to grow up in a large, loving and supportive family, and learned early on the value of hard work, loyalty to family and friends, and honesty.

He graduated in 1962 from Jersey Community High School in Jerseyville, and went on to earn his Bachelor’s Degree from Illinois State University in Normal, and eventually his Masters Degree from University of Illinois-Champaign, both in education.

Roger began his teaching career in 1967 as an agriculture teacher at Chandlerville High School, where in 1974, he became Principal, remaining in that position until 1982. He then joined the team at Country Financial, opening his own office in Beardstown, where he remained for 31 years, retiring in 2013.

Whatever the task or hobby, Roger hit it with an unmatched passion. He held a huge love for his former students and co-workers, colleagues and the many devoted friends he gained throughout his life.

From an early age, Roger obtained his intense love of horses. Throughout his life, he raised, trained and showed Morgan horses in numerous venues throughout the country. He passed his love and dedication on to both his children and grandchildren, properly teaching them how to ride. He enjoyed trail riding and camping with family and friends, and if Roger was around, there was never a dull moment.

He married the love of his life, Regina Kuhn, on July 6, 1968 at the Sacred Heart Catholic Church in Oconee, Illinois, and together they have been blessed with 53 years of wonderful memories shared along the way with family and friends.

Roger and Jeannie organized the Saddle Up for St. Jude, benefiting St. Jude Children’s Research Hospital, for the last 20 years, and have raised over $800,000.00, and received the Event Coordinator of the Year Award in 2012.

Roger and Jeannie moved to Chandlerville in 1967, and have remained a vital and proud part of their community. They raised their two sons in a loving and supportive home, and always had an open door policy at their home. Roger loved his family with his whole heart, and after his grandchildren arrived, it didn’t take long into a conversation to realize how much love and pride he had for all of them.

In addition to his parents, he was preceded in death by his father in-law and mother in-law, Robert Charles and Virginia Kuhn; three brothers in-law, Jerome “Jerry” Essington, Joseph Kuhn and Kevin Kuhn; a sister in-law, Carole (Kuhn) Wetherell; and a nephew, Jay M. Essington.

A casual gathering for family and friends will take place from noon until 4:00 p.m. Sunday at the Landon family residence on Questing Hills Road in Chandlerville. Casual dress and a good story are requested.

A service will be held at 4:30 p.m., under the pavilion at the Jim Edgar Panther Creek Questing Hills State Park, a place that was dear to Roger’s heart. Rev. Hugh Carlock will officiate.

In lieu of flowers and plants, Roger would absolutely love for memorials to be made to St. Jude Children’s Research Hospital or to Cass-Schuyler Hospice.

Crawford Funeral Home in Jerseyville has been entrusted with arrangements.

Memories may be shared with the family by visiting www.crawfordfunerals.com