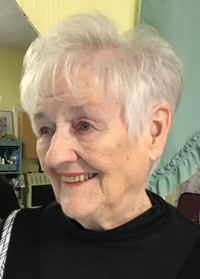 Judith Diane Thomas, 83, of rural Perry passed away peacefully on October 2, 2021, at her Pike County home with her daughter Vonna by her side. Her rare blood disorder had only recently been diagnosed.
Judith was born to Harold and Vonna Geraldine Albers November 27, 1937, in Chapin, Illinois. She was born in the same house as her mother and sister. She grew up in rural Bluffs and on May 19, 1956, she married Everett Eugene Thomas at her parents’ home. The couple had one daughter, Vonna Park. Gene preceded Judith in death February 5, 2021, just three months before their 65th wedding anniversary.
Judith is survived by her daughter, Vonna Park; her sister, Karrie Lou Hutton; her nephew, Andy (Tracey) Hutton; and grandniece, Andie (Landon) Wells; as well as brothers-in-law, Lyle (wife Pat) Thomas and Larry (wife Shirley) Thomas; and a number of other nieces and nephews.
She was preceded in death by her parents; her husband Gene; a brother-in-law Kenneth Hutton; a nephew, Jay Hutton; as well as a brother and sister-in-law, Irene and John Plunkett.
As a young mother Jude, as some called her, became interested in the Bible and was curious to understand this unique guidebook from her Creator Jehovah. She gradually found satisfying answers first through informal conversations with her mother Geraldine and sister Karrie. And then during a formal Bible study lovingly conducted by Karrie and Kenny Hutton. She and Gene were baptized as Jehovah’s Witnesses in 1972, and were zealous members up to their deaths. Even a Covid Pandemic could not keep Judith from sharing her faith with others by letter, by phone and in person during doctor visits and a hospital stay. She maintained a rock-solid hope in a resurrection to a paradise earth and eagerly looked forward to getting to meet ALL of her ancestors. This was so eagerly anticipated that during sleepless nights she did not count sheep. Instead, she listed all those long-gone people she was so eager to meet!
Memorials can be made to Blessing Hospice, whose assistance was invaluable, or to the Beardstown Congregation of Jehovah’s Witnesses.
The Buchanan & Cody Funeral Home in Jacksonville is assisting with arrangements. A Zoom Memorial Service will be held at a later date. Condolences may be sent at buchanancody.com.