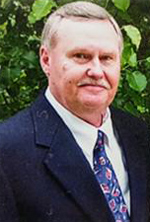 Ronald Kent Sanderson, age 81, of Manchester, MO passed away on Wednesday, October 6, 2021 at St. Luke’s Hospital in Chesterfield, MO. He was born on April 1, 1940 in Chicago, IL to James Kent and Doris Eva Denison Sanderson. Kent married Mary Sue Jones on August 21, 1960 in Pittsfield, IL and she preceded him in death on November 30, 2019.

He graduated from Pittsfield High School where he was a Varsity letterman in football, basketball and baseball. Kent graduated from Culver Stockton College with a BS degree in Business Administration and Economics. He worked for Brown Shoe Company also know as Calares as an Office Manager in three states and then as an Internal Auditor for the shoe factories for 33 years, retiring in 1995. He loved to cruise the two lane highways with Mary; especially Route 66, Lincoln Highway, Dixie Highway, and National Road in his cherished 1977 Chevrolet Monte Carlo, 1974 Corvette, and 2004 Chevrolet Monte Carlo SS. He always loved the small towns. Kent enjoyed shooting pool with friends and playing on leagues and was a top shooter in Missouri 8 Ball League 2005.

He was preceded in death by his parents, James and Doris Sanderson; and his loving wife, Mary Sue Sanderson.

Services to be held privately and cremation rites have been accorded. Memorials are suggested to be made to Smith Cemetery. Online condolences may be left to the family at www.nieburfh.com. Niebur Funeral Home in Pittsfield is handling the arrangements.