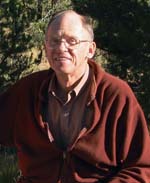 Kaye was born Oct. 8, 1932 in Bryan, Ohio and grew up in Macomb, Illinois. He attended West Point Military Academy, graduating in 1955. He and Judith Green met while he was at West Point and she at Vassar College and the two were married in June of 1955. Shortly thereafter they were stationed in Germany as Kaye served as first lieutenant in the U.S. Army from 1955-1958. They then returned to the states for Kaye to pursue a Master’s and then PhD from California Institute of Technology.
He worked at the Los Alamos Scientific Lab from 1962-1984, with 2 years at General Atomic in La Jolla, CA. From there he moved to California to be Associate Director of the Stanford Linear Accelerator from 1984-1994.

From 2006-2012 he served as Administrative Law Judge for the Atomic
Safety and Licensing Board panel of the U.S.Nuclear Regulatory Commission.
During his career he was awarded the Distinguished Service Award from Los Alamos National Laboratory and the EO Lawrence Memorial Award for for his contributions in the development of techniques and computer codes for solving the neutron transport equation from the Energy Research and Development Administration.
He and Judy retired in 1994 to Ridgway, Colorado to spend their years hiking, skiing and biking in the San Juan mountains of Southern Colorado.