Tyson Brown scored to start the run, and Lathan Barnett made one of two free throws. Brown scored six straight points before Chance Little scored to extend the lead to 19-6 with 2:43 remaining in the quarter.

Peyton Hartley and Tysyn Mast each made three-point baskets, Zach Evans scored, and Jaydon Howard converted a three-point play, and the Cougars led 30-6 after the first quarter.

West Central led by as many as 32 points, 49-17, in the second quarter after Brown made a three-point basket. The Cougars led 51-23 at halftime and 72-28 after three quarters. 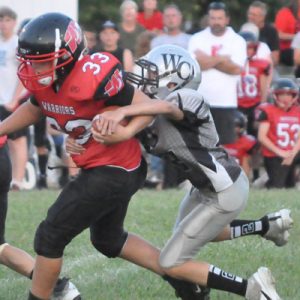 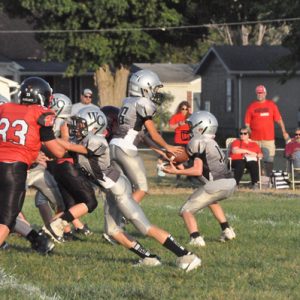 Handoff in the backfield

Record breaking win for the Cougars

Lady Cougars win in two By KENT COULTAS Scott County Times Lily Little had 12 points to lead West Central to a 25-13, 25-22 win over North Greene in volleyball Sept. 6 at White Hall. Little also had two aces, 10 assists, seven kills and one block. Rylee Burk scored eight points, including one ace, and eight digs. Elise Brown had five points, including one ace, four kills and one assist. Gabby Sievers had one point, including one assist, two kills and two blocks. Brylee Lawson had three kills and three blocks. Bell Brown had two kills and two blocks. Abby Vieira had two digs and one assist. Kenley Coats had three points, and Gracie Moore had three kills. Shaylyn Bitoon had one point and one dig. Josie Clayton had one kill. West Central also won the junior varsity game 25-18, 24-26, 25-6.