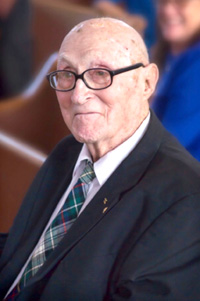 Elmer L. Bradbury, age 102, of Perry Ill. died Sunday, April 17, 2022, at Cedarhurst Assisted Living in Jacksonville, Ill. He was born in Perry, Ill. on March 15, 1920, son of the late Homer and Bertie Bradbury and until recently lived in or near there his entire life.
He married Freida Marie Orr in May of 1941 in Perry, Ill. and she preceded him in death on July 28, 1998.
He was also preceded in death by, two sisters, Ethel Cooley and Verna Cannall and two sons, John Wesley Bradbury and Kenneth Wayne Bradbury and daughter in law Nancy Bradbury.
Elmer is survived by one son, Keith Bradbury, two grandsons, Douglas Bradbury (Jennifer) of Glen Ellyn, Ill. and David Bradbury (Dr Allison) of Columbus Ohio, four great-grandchildren, Hope Kathryn Bradbury, Hendrick Wesley Bradbury, Kendall Jean Bradbury and Vaughn Martin Bradbury.
Mr. Bradbury was a farmer, banker, real estate appraiser and John Deere Dealer. He started the John Deere Dealership in Perry in 1947. In later years he worked for the bank in Griggsville, Ill.
Elmer served in a volunteer capacity for many groups and organizations including Illini Hospital, the Pike County Health Department, and Perry School District Boards. He was clerk of the Session for the Perry Presbyterian Church and Treasurer of the Perry Cemetery Association for 6 decades. He was Township Trustee for 30 years as well as serving on boards and had memberships in Pike County Red Cross, Cancer Society, Heart Association, Cherokee District Boy Scouts, 4H Federation, Farm Bureau, Extension Service, Illinois Federation of Square Dancers, Perry School Foundation, Western Illinois Fair Board, Mental Health Board, Country Couples Club, and Order of the Eastern Star.
Elmer was a 77-year member of Perry Lodge #95, Quincy Consistory, Pike County Shrine Club and Ansar Shrine. He was very proud that both of his sons and both of his grandsons were Masons. He entertained as a clown for over 35 years in parades, at Hospital and camps for children with special needs. Many times, he was joined by his grandsons. Elmer was very proud of his entire family and was their biggest fan. Elmer’s sense of humor and ability to pull a prank was both enjoyed and feared by all.
An example and tribute to Elmer’s character was when he was 18 and plowing with two horses north of Perry, a friend stopped to ask him if he would make a pledge to help build a hospital in Pittsfield. He pledged $25. He said that was about a week’s wages and it took him a long time to pay that pledge.
Funeral services will be held 10 a.m. Thursday, April 21, 2022, at Airsman-Hires Chapel in Griggsville, Ill. Burial will be in McCord Cemetery with graveside Masonic rites. Visitation will be held from 4 p.m. to 7 p.m. Wednesday at the chapel. Memorials may be made to Green Pastures Christian Retreat Center and sent to Airsman-Hires Chapel, Box 513, Pittsfield, Il. 62363. Condolences may be sent to the family online at www.airsman-hires.com.