It’s August and I’m enduring the heat and humidity to check trail cameras, stands, and plots. The upcoming deer season is less than a month away around here. That doesn’t mean I’ll be partaking, but only that I’ll have that option should I want to. As I have mentioned many times before, I prefer the cooler days of Oct and November. Most bucks do too. That means unless I have a good one on camera during Sept, I’ll just be content to wait until closer to the rut. I can remember when opportunity seemed to demand immediate action. I thought since the season only lasted a few months, I needed to take advantage of every occasion to be in the woods. I let the opportunity drive me instead of mixing it with probability and future prospects. What I mean by that is, I thought I needed to jump at the first occasion for fear of missing out. In the financial world, it’s called FOMO (fear of missing out). It’s when people have money in their pocket, see a stock move up, and fear if they don’t get in now, they will miss their opportunity. Many times, however, they find out if they had waited just a little longer, they would have been able to buy that same stock at a much lower price. The problem was, the stock market opened, they had cash burning in their pocket, and the hype of the possibility, all caused them to FOMO in.

Many people FOMO’d into the Christian faith. They were told about Heaven and Hell and instead of being drawn by the love of a Heavenly Father, they were drawn by the fear of Hell and of missing Heaven. And as a result, they begin to picture God as simply an emotionless judge only interested in rightly dividing the sheep from the goats. Depending on which translation you read, the admonition to “fear not” or its likeness, is mentioned over 100 times in the Bible. It is always God’s word to his people. It is the opposite of faith. And when it comes to one’s relationship to God, it is the opposite of love and the wrong reason to become a follower of Christ. I can’t imagine God telling me not to fear and then wanting me scared into becoming his disciple. I prefer the Apostle John’s way of doing it. He said, “For God so loved the world.” And that means God so loved me. And he does you too. Don’t FOMO into faith. Be drawn by a love you have never known, and you simply don’t want to do without.

Gary has three books that are compilations of the articles he has written for nearly 15 years. He also speaks at game dinners and men’s groups for churches and associations. You can contact him at gary@outdoortruths.org. 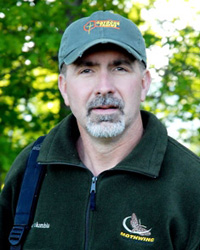