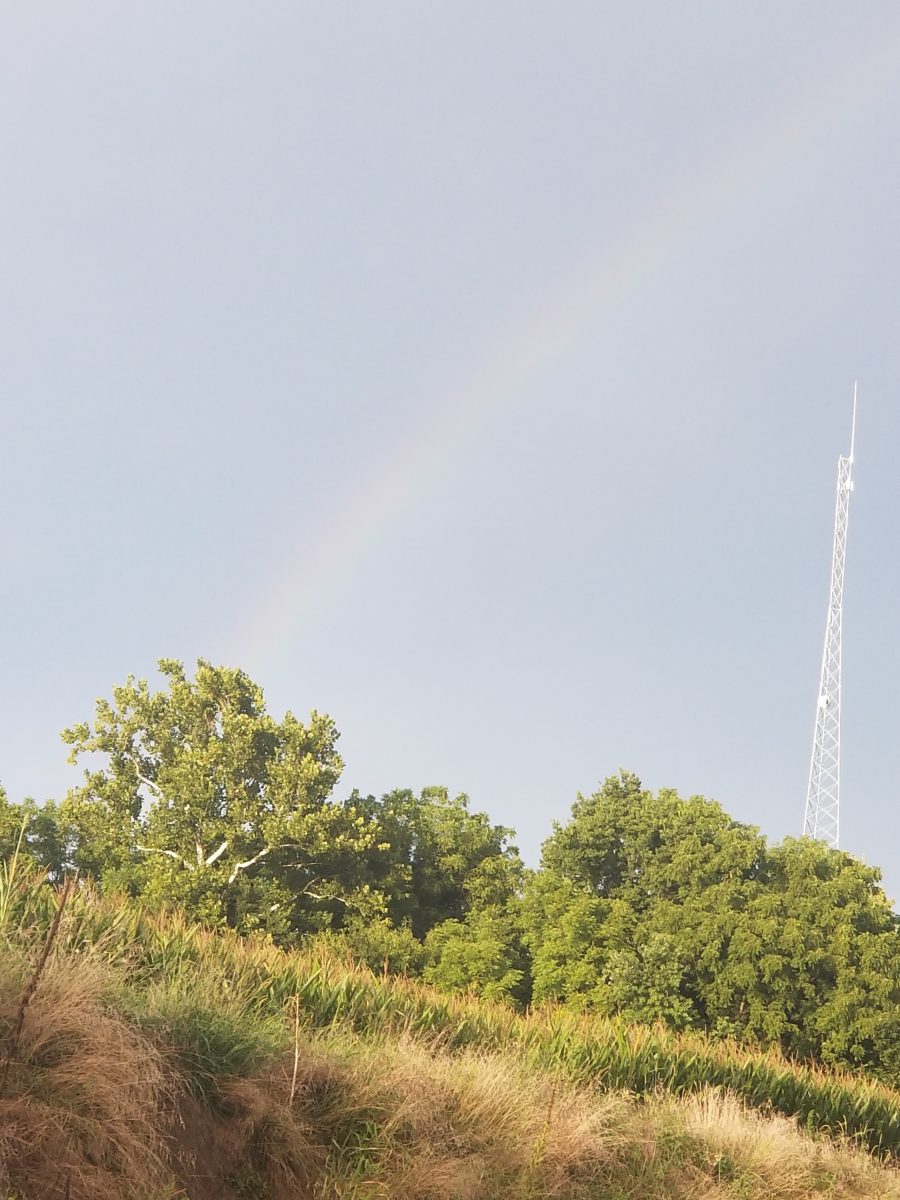 (Cynthia Haggitt/River County News)
Rainbows are frequently seen in the wake of a rainstorm, like the short rainstorm that was late in the afternoon on Monday, Aug 23.

On Monday there was a huge rainstorm. Most people were safe from the rain in their homes and some people looked outside to see what the weather was still doing. As the sun was just starting to come out from behind the clouds, and the rain ended. There is a magical sight to see-a rainbow!

Everyone loves to see a rainbow after a major thunderstorm.  A beautiful curved arc of bright colors peeking out over the landscape is just breathtaking. Also rainbows are filled with  history– where legends, stories and beliefs are steep in fairytales.

According to the Bible, the rainbow is the sign of God’s promise to mankind that he will never again flood the Earth. Indeed, rainbows often indicate that the rain has passed.

The farmers almanac states, “Rainbows appear when they are directly opposite from the sun and where a person is facing in relation to the sun. Rainbows  have no set physical location. A person who appears to be standing at the end of a rainbow from another person’s perspective won’t see the rainbow in the same place, but will instead see another rainbow in a different location, opposite the sun. The top of the arc is always centered on the viewer’s head.”

Rainbows are frequently seen in the wake of a rainstorm, like the short rainstorm that was late in the afternoon on Monday, Aug 23. They come when the sunlight breaks through rain clouds.

The farmers almanac said, “In the morning the sun is in the east; to see a rainbow you must be facing toward the west where it’s raining. Since showery weather usually comes from the west, take warning from the morning rainbow. In the afternoon the sun is in the western sky; after a shower or thunderstorm has already passed you, it usually is retreating toward the east, where you’ll see your rainbow.”

A rainbow has seven colors: red, orange, yellow, green, blue, indigo, violet. A person  may remember the order of the colors in the spectrum by using this popular phrase:ROY G. BIV.  This mnemonic phrase is often taught when a person  attends elementary school. These colors appear in order according to their wavelengths.

A rainbow is created when white light is refracted while entering a droplet of water, split into separate colours, and reflected back.Light enters a water droplet, slowing down and bending as it goes from air to denser water. The light reflects off the inside of the droplet, separating into its component wavelengths–or colors. When light exits the droplet, it makes a rainbow.

Actually, what makes rainbows so special is that no two people see the same exact thing. Since it all depends on how the light is being bent and reflected back to you, everyone sees something different. Even though they are just light that is shaped through water, they continue to be seen by everyone and are loved by all people who see them.

Ridge Runner Chronicles: The Speech Police Are At It Again