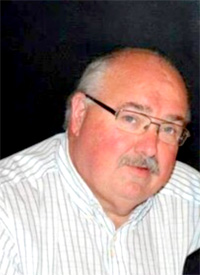 Larry Joe Alexander, 57, passed away on September 6, 2021 at his home surrounded by his loving daughters. He was born on October 31, 1963, in Jerseyville, Illinois, son of George and Bernice (Price) Alexander, both deceased. Larry was a proud product of Dow, IL and had many fond memories of his youth growing up there. He was a 1982 graduate of Jersey Community High School, which he had the honor of being named Prom King by his peers. After graduation, Larry went to Worsham College of Mortuary Science and obtained his degree in funeral directing and embalming. Larry married the love of his life, Julie Ann Calvey, on June 24, 1989 at the Presbyterian Church in Jerseyville. After building a beautiful life together, Julie died on May 14, 2016 after a courageous battle with cancer.

In 1985, Larry started his career at Gubser Funeral Home and became owner in 2000, naming it Alexander & Gubser Funeral Home. In 2020, the funeral home became Alexander Funeral Home. As time went on, he aspired to become the Jersey County Coroner. In 1992, Larry was elected as the Jersey County Coroner and continued to hold that political office until his death, which made him the longest running Coroner in Jersey County history. Throughout his political career, Larry was proud to be a consistent “Top Vote Getter” in Jersey County and was always so thankful for every vote in support. Larry was a member of the 1st Assembly of God Church of Jerseyville, Jersey County Republican Party, Ainad Shriners, Full Moon Masonic Lodge #341, The Scottish Rite, The National Rifle Association, the Illinois Funeral Directors Association, the National Funeral Director Associations, the Gideons International, and the Illinois Odd Fellows.

Larry was proud of his family’s involvement with the community and the school district. In the past few months, Larry and his daughters have been in the process of creating a scholarship in Julie’s memory. Alyssa and Kari Jo have decided to honor both their parents with a joint education scholarship. Therefore, in lieu of flowers, memorials may be made to the creation of the “Larry Joe & Julie Ann Alexander Memorial Scholarship.”

Alexander Funeral Home is in charge of arrangements.