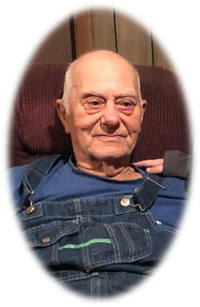 William H. Pearson, age 86, of Bedford, IL passed away Sunday, April 17, 2022, at Memorial Medical Center in Springfield, IL. He was born May 10, 1935, in Spring Creek Township to Harry and Onita Crader Pearson.
He attended school in the Bedford and East Pike School District. Bill was a grain and livestock farmer all his life, raising both cattle and hogs. Bill enjoyed time at the river fishing with Charlie and spent many hours cleaning and frying fish for Sunday dinners with the family. He could often be found mowing his yard, making a quick run to Pearl to run errands and pick up Bug Juice with Justin and Courtney when they were younger. As Justin got older, he made sure their chew supply was well stocked, as they were known to bum a chew off each other. One of his favorite pastimes was relaxing in his chair and watching westerns. Bill loved spending time with his grandkids and great-grandkids, often playing checkers, boating, riding 4-wheelers and going to get ice cream. Hanging out with Knox, Harlow, Waylon and Jolene always brought a huge smile to his face and a twinkle to his eye! Bill was a stubborn, funny man who was full of tall tales; he was sometimes brutally honest but always with a sunny smile. He loved his family dearly and his grandchildren were the icing on the cake, he will be deeply missed by all.
Bill is survived by two sons, Charlie (Karen) Pearson of Bedford, IL and Sam (Carla) Pearson of New Berlin, IL; five grandchildren, Justin (Lisa) Pearson, Courtney (Mitchell) Smith, Kayla Pearson, Kassandra (Chris) Boyd and Harrison (Mariah) Pearson; eighteen great-grandchildren; and several nieces, nephews and cousins also survive.
He was preceded in death by his parents, Harry and Onita Pearson; son, William ‘Willy’ Pearson; sisters, Audrey Coonrod, Mary Sisk, Violet Richards, Virginia Scoggins and Joyce Ehlert; brother, John Pearson; and ex-wife, Marlene Pearson.
Funeral service will be held at Niebur Funeral Home in Pittsfield, IL Thursday, April 21, 2022, at 1 p.m. with visitation held prior to the service from 11 a.m. to 1 p.m. Interment will follow at West Cemetery in Pittsfield, IL. Memorials are suggested to be made West Cemetery. Online condolences may be left to the family at www.nieburfh.com. Niebur Funeral Home in Pittsfield is handling the arrangements.